Half of the year is behind us now. With brand new core updates dropping, it’s clear that we can’t take all of our old strategies into the next quarter. If you want to stay caught up, you’ll need to know about the fresh releases we’ll be covering in this month’s roundup.

First, you’ll learn some new moves from our guides. They cover how to build white-hat links for local businesses, how to perform different kinds of keyword research, and whether fixing broken links is worth your limited time.

Then, you’ll get data you can use from the month’s top case studies. You’ll gain insight into the winners and losers of Google’s most recent core update and how to make it into Google Web Stories.

Finally, you’ll see some news from the last 30 days that you shouldn’t ignore. It will cover a (previously) unconfirmed search ranking algorithm, Google’s updates to video best practices, and new penalties for sites that engage in questionable claims.

I recently published this guide on how to build local links safely.

You might assume that building local links is easier, but regional relevance is vital with these links. That can make for an additional challenge that can be tough to overcome—especially when your local region only has a small number of sites to approach.

In my guide, I identify seven different strategies that you can use to build (completely white hat) links for local sites. For example, I lay out how you can:

The guide takes you through each of these strategies in detail. You’ll learn how they work and how to put them into action.

Excellent keyword research will help you target better sites for this work. In the following guide, you’ll learn about four different kinds of research to perform.

There Are Four Kinds of Keyword Research; Make Sure You’re Doing the Right One(s)

Rand Fishkin of Sparktoro brings us this look at keyword research and how it’s a lot broader than you might assume. He starts by establishing four different kinds of research:

As he explains, there are some critical differences in how research is performed based on why the research is necessary. He lays out the goal, the process you should use, and tools that can help you get the job done for each one. 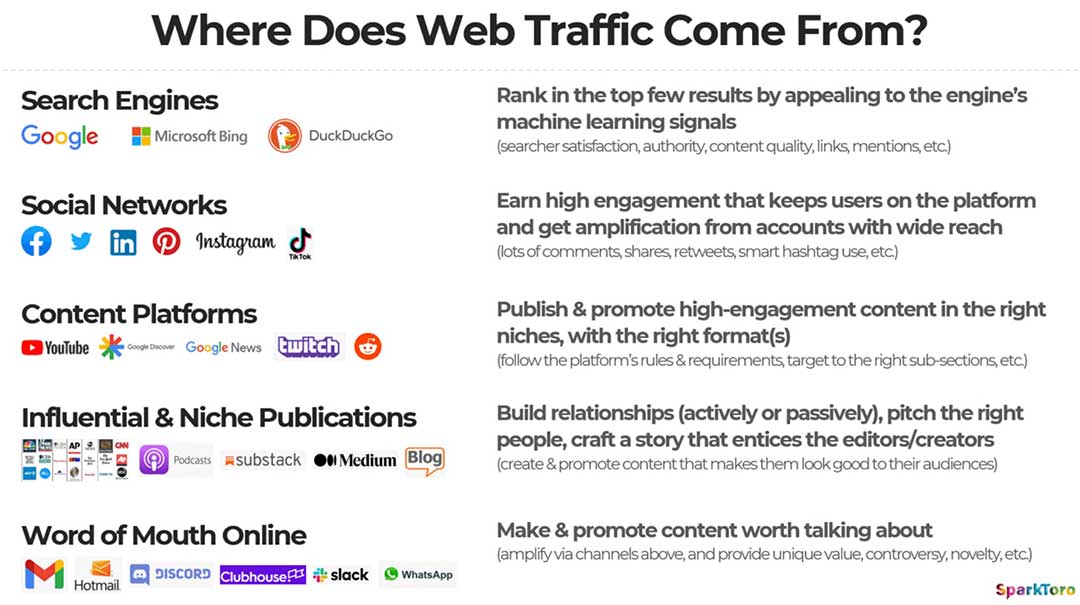 The first one (SEO/PPC) is what most people have in mind when they think of keyword research. The goals and processes of that type are well understood. So, let’s use the last one as an example of what he thinks you should be doing differently.

For market/audience research, he identifies the goal as learning more about the audience’s preferences so that you can use the data to answer questions like:

For the process, he suggests that you should be building personas to match to keywords, rather than just finding top keywords for the niche. He also lists several tools that may help.

You can find all of this information for all four research types involved in the complete guide. For our last guide, we’re going to take you back on-site. We’ll look at whether fixing old broken links is worth enough to be a priority.

Cyrus Shepard of Moz brings us this look at the utility of fixing old links. He starts by asking us if we’re familiar with the following scenario: You’ve taken the time to fix a broken link, and you’ve noticed that nothing has happened. 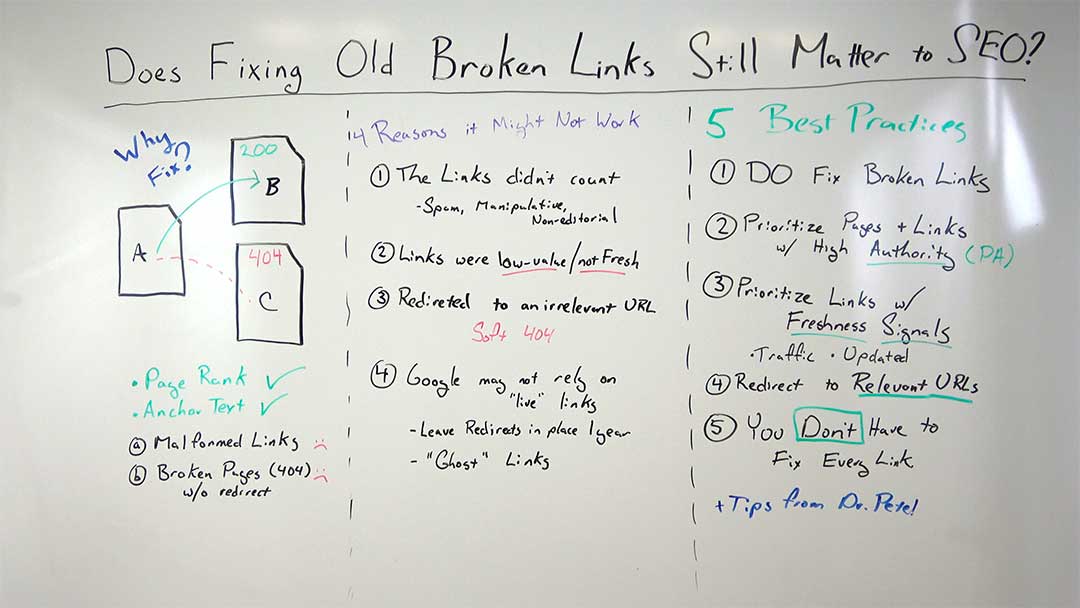 As Cyrus points out, this has happened to a lot of people. He starts by looking at some of the reasons that it can occur, for example:

He also suggests some methods you can use to identify which reason may be responsible for your fix not working.

He closes out the guide with some additional advice and judgment calls on how you should handle broken links. He explains that fixing links is mostly worthwhile. Then, he covers how to prioritize freshness and redirect broken links to relevant URLs.

That’s the last of the guides for this week. Next, we’re going to look at some of the data published over the previous 30 days. We’ll start by looking at the winners and losers of the June core update.

Lily Ray of Amsive Digital brings us this comprehensive look at the June 2021 Core Update and the sites that benefited (or didn’t).

If you missed it, Google announced that a core update would be rolling out in two parts. The first part of the update rolled out in early June and was confirmed as completed on June 12. The second part will follow later in July.

For now, Lily has the score on who is winning or losing. The analysis is based on the Sistrix Visibility Index. After that, the category of each domain was collected using Similarweb categories to assess how particular niches were affected.

She starts by providing the 50 domains that achieved the most significant increase in visibility.

That’s followed up with the 50 sites that saw the worst decrease in visibility.

As she warns in her preamble, these updates are based on thousands of factors. No one should feel confident that they’ve isolated the reasons that a given site won or lost. 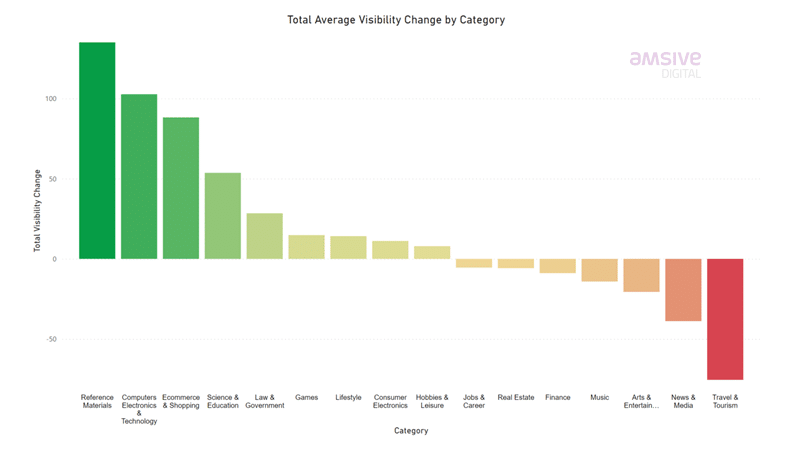 However, some strong trends among categories of sites may help us understand this update better.

There’s a lot more to digest in this case study, so be sure to add it to your reading list. For now, we’re going to see what the data says about a much more narrow subject: How to make it into Google Web Stories.

Olga Andrienko of Semrush brings us this look at how you can make it into Google stories based on the data from 2,400 different search results. 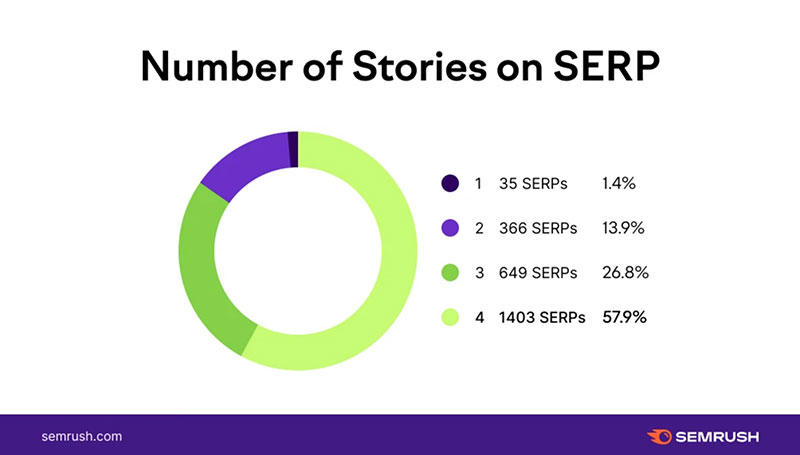 As you may already know, Google Web Stories is a visual type of content that allows creators to combine video, audio, and other multimedia into a tappable sequence. Google features story results for some searches, and this study looks at what the featured stories have in common.

Among other factors, the study examined:

The study collected some data that may be very helpful if you want to rank your own stories. For example, Semrush discovered that:

In the complete study, you’ll find plenty more information that you can use to optimize your own stories to appear. Given the favorable position they receive in SERPs, getting it right may be well worth the investment.

With our data pieces out of the way, we’re ready to take a look at the latest news. Let’s start by examining an unconfirmed search ranking algorithm update that may have dropped in early June.

Google has been doing a lot this month, but as Barry Schwartz tells us in this piece from the Search Engine Roundtable, not all of it was discussed officially (at least at first).

Several updates showed up in site data that were not previously listed in Google’s update reports. We later learned that this was a last-minute tweak of the June update.

Barry collected some of the chatter about the final push in this piece.

Multiple SEOs in a Webmaster World thread reported massive hits to their sites, with “50% drops” being independently reported by several people. There were also claims that affiliate sites have dropped hard from top positions—some even leaving the first five pages. 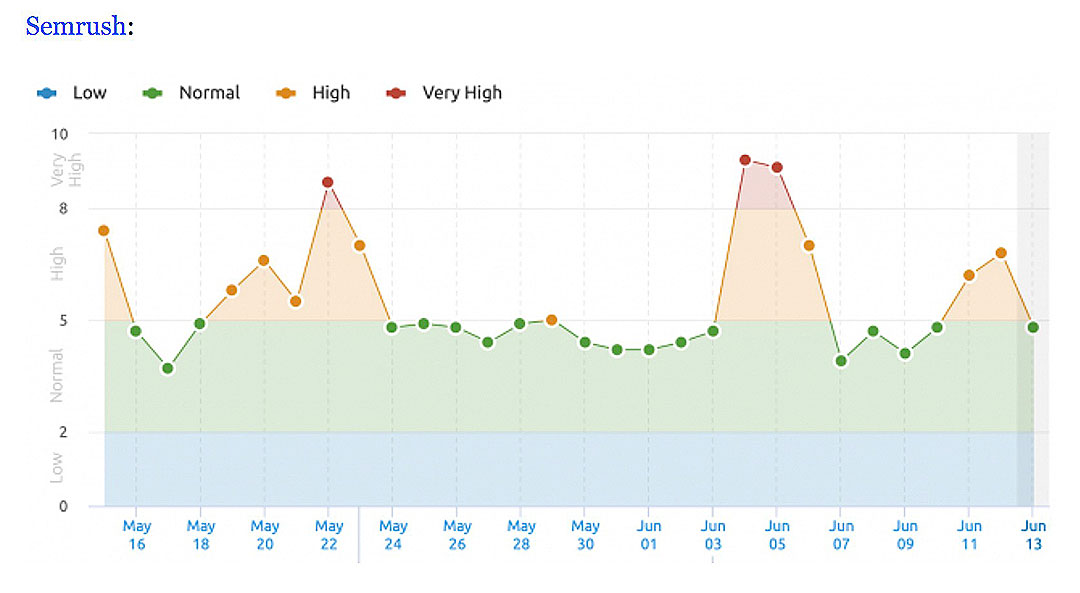 Barry provided some context for this chatter with some tool data. You can see the changes that happened in his charts of MozCast, Semrush, and RankRanger fluctuations.

While Google doesn’t announce all of their changes right away, they were helpful enough to provide some early documentation for another change this month. Google has expanded its “video best practices” document with some notable new passages.

SEO Brodie Clark caught a quietly-updated change to Google’s video best practices. The change involves how pages should be optimized for SafeSearch to keep adult content separate from content intended for all audiences. 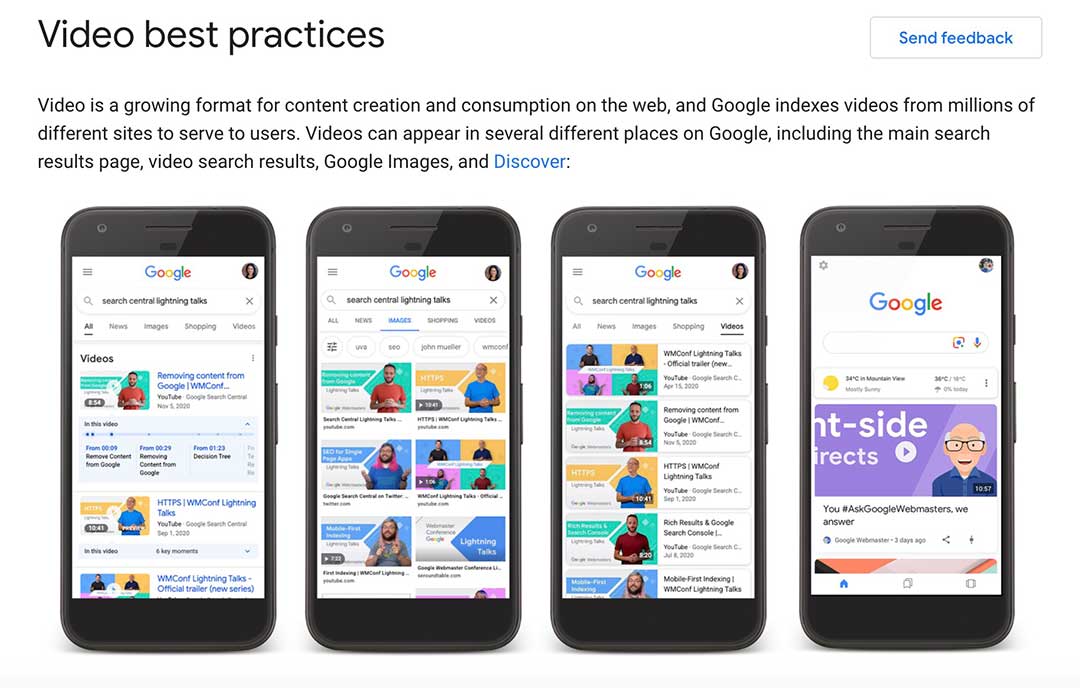 Google is instructing you to do as much as you can to help them understand the nature of a page. They strongly recommend (bolding theirs) that you group any adult videos away from other videos on your site. For example, they should have their own category page.

They also ask that you add metadata to all adult pages—specifically, the content rating markup. They provide some examples in the doc for you to copy-paste if needed.

While the guidelines don’t state it directly, the updates suggest that non-compliant sites risk being labeled as adult content. If adult content on your site ends up in SafeSearch results (because it’s not labeled), you may have a long road back to being featured.

This wasn’t even Google’s only attempt to clean up the neighborhood this month. They’re also taking more action against sites that engage in unverified claims and slander.

Matt Southern of Search Engine Journal brings us this look at significant Google algorithm changes in the coming months.

Google has announced that they will be taking action to suppress slander of “known victims” (people who have approached Google to have the claims assessed). Search results will now suppress mentions of these individuals, including specific sites and pages.

According to an earlier New York Times piece, this action is being taken in response to sites engaging in “slander peddling.” This scheme involves sites charging individuals money to remove unsourced claims or adult images uploaded in retaliation for a breakup.

The action will not apply only to sites that have been identified as hosting this content but also to sites that repeat similar claims in the future. The feature is currently in testing, though the effects can already be seen in some live searches.

There is currently no timeline on when the feature will be fully implemented.

Got Questions or Comments?